Charrisse discusses what it takes for an aspiring self-made woman to break into a wealthy social circle.

Not everyone dreams of becoming a reality TV star or imagines that they’ll end up living in one of the wealthiest neighborhoods of America. That’s certainly the truth for Bravo’s Real Housewives of Potomac co-star Charrise Jackson Jordan, who grew up with seven siblings in a humble neighborhood in Somerset, New Jersey. The mother of two, who is rumored to have a net-worth that surpasses $1 million, says she made the decision to appear on the show after being approached about the concept twice: “It’s not often that the same thing comes back to you but in a different form,” Charrise told us. With a second season under her belt and a new outlook on life after separating from estranged husband and former NBA player Eddie Jordan, Charrise is using her collective life experiences as a former basketball wife and philanthropist to uplift ambitious women around her. In this interview with BAUCE, Charrise discusses what life is like in the big leagues and what it takes for an aspiring self-made woman to break into a wealthy social circle.

Did you ever imagine you would end up on reality TV growing up? What do you like about it and what don’t you like?

Charisse: Absolutely not! I never thought in my wildest dreams I’d be a part of reality TV. For some reason within the last six or seven years, I’ve had different reality tv situations approach me. Most of them were things that were never even heard of. But with The Real Housewives of Potomac — they approached me twice about doing the show! They originally approached me to do the DC show and I was like “absolutely not!” and then when it came around again I started re-thinking the proposition. One thing about me is that I look at life as things happening for a reason. It’s not often that the same thing comes back to you but in a different form. So that’s the only reason why I gave it a second look.

Were people around you on board about you being on a reality TV show? Usually that type of decision draws questions from friends and family, right?

Charrisse: I was having issues in my relationship at the time…issues being that my husband was living and working in New Jersey working while I was here [in Potomac]. It was a very challenging time and the last several years of our relationship had been very challenging. I knew he was totally against the idea of reality TV; when I talked to him about it, he said he wasn’t into it and if that’s something that I wanted to do then we’ll probably end up getting a divorce. That response wasn’t quite what I was expecting but at the same time it made me look at things differently.  I had to re-examine things and I told myself, maybe this “reality show” is a second chance at life for me.

I mean, I gave up my dreams for my husband’s career. I hadn’t worked in 19 years! I wasn’t a huge fan of doing the show but I realized that the situation with my marriage wasn’t changing so even if it ended in divorce, this platform could be an opportunity for me to jump start my career by doing something else. 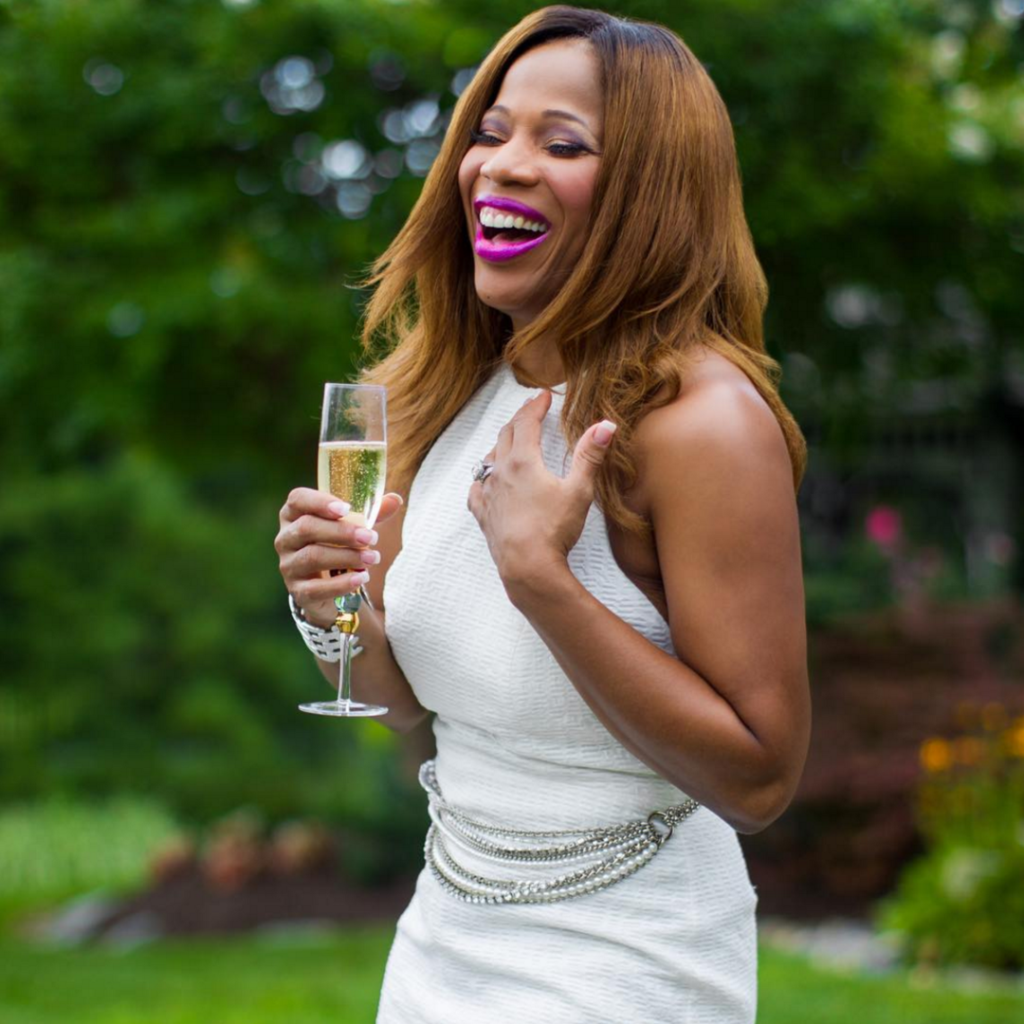 Wow. How does one create a “second life” for themselves, especially as a newly independent woman? How does a woman create her own identity outside of the shadow of a wealthy or super successful spouse?

Charrisse: Well, I will say that I never felt like I lived in my husband’s shadow. Event though I was his wife and he did well for himself in terms of his career, I was always doing my own thing. I was heavily into the community and he wasn’t part of that aspect of my life. I turned community service into a job. I had started my own circles, because the organization in Washington weren’t very family-oriented. Some NBA organizations are very family-oriented, but DC wasn’t one of them. And so I started having my own circle of friends outside of the NBA and finding my own resources outside of the NBA because unfortunately at the time, DC wasn’t heavy into the community service aspect either. Because of my interests, I had to develop my own connections and relationships separate from my husband in order to do what I wanted to do. This new chapter now is easy for me because I was always my own person.

I used to be President of Behind the Bench, the NBA Wives Association, in Washington and I spent more time with the player wives versus the coaches wives. They were a lot younger and I was always telling them you got to do your own thing, you have to be your own person and have your own identity. Everything about their lives was scheduled around their husband’s schedules. I’d ask them — do you think your husband is checking your calendar when he wants to do something? You don’t even have your own calendar! Instead of idly sitting by waiting to do something with him, be available for yourself.

You know I’ve made the same mistakes as they did. I fell into the trap too. I stopped doing things for myself. All my time was dedicated to running around for my kids, managing my household or our three homes, and doing community service stuff. I was a basket case! because I did nothing for myself. At the time I didn’t even know what made me happy. So reality TV has become a platform for me to figure all that stuff out.

You are also a huge philanthropist and have raised millions of dollars for various charities and non-profit organizations over the years. What is your secret tip for being able to get so many people to donate their money to causes you care about?

Charrisse: I think it’s all about being a positive person and being a good person in general. When people like you and when you’re a kind person and you’re doing positive things, [people] want to be supportive especially if they can be supportive. I like to support other people. When I do things, I can’t just ask people to support me if i’m not supporting them, so I make sure that before I ask someone to attend one of my fundraising events that I find out what’s on their calendar and go support it first. They don’t expect me to support them, so when they see you supporting what they do they want to support you even more. That’s been the best way for me to get money from other people (laughs).  It’s about networking and being a good person and supporter.

Is there any fundraising etiquette that you believe people should adhere too?

Charrisse: Because you always want repeated support, you have to be able to thank people. Believe it or not, a lot of people fail to  thank people for what they’ve done. I find that across the board. When I was President of the NBA Wives Association, I analyzed our past projects and asked myself, why are we losing so much business?  But I realized there was a lack of “follow up” and thus, repeated support. I don’t care if someone gives you a check for $5 or $50,000 — a thank you is a thank you. And when they see that, they will appreciate you even more in the future.

I remember this  one woman who wrote a check and it was for a small amount like $100. I wrote this woman a thank you letter as if she had donated a million dollars. The next go round, she wrote an even bigger check and told me that the thank you letter she wrote touched her heart and that she wanted to extend a bigger donation as her thank you back to me!  That’s the power in a “thank you”; people just don’t say it anymore. It’s all about customer service when you’re doing things like this. You want your customer to feel good. Whether it’s five cents or not,  you want them to feel good so they will want to come back and help you again.

There are several young, ambitious women that might see your luxurious lifestyle on TV and dream of being connected to high-powered people. How does one break into an elite social circle? How can a BAUCE woman increase the net-worth of her network?

Charrisse: My belief with young people in general is that you have to surround yourself with people that are more experienced than you, smarter than you, and wealthier than you. If you’re ambitious, you’re not going to learn anything from someone working at a 7-11. Not that they can’t be your friend, but if you’re trying to own a 7-11 or you want to own a chain of 7-11s, then you need to get to know the owners of 7-11 and find ways to get into their circles.

When I was younger, I met this set of three sisters on a plane and they were all married to doctors. Their father was a doctor and I believe a lot of women in their families were married to doctors. So, I asked them — how did all three of you women (who are not involved in the medical field at all) end up marrying doctors? You know what they did? They would take classes! They took medical classes and they weren’t even in school for medicine. They would go and audit the classes just to meet these doctors! They would go to symposiums and any type of events related to doctors. Who would have thought to do that?

So, you have to surround yourself with people that are successful that are doing the things you want to do in order to get to where you want to be. I promise you that kindness goes a long way when it comes to building these type of friendships, especially if you don’t feel like you have the money to level up to their status yet. When you are surrounding yourself with these type of high-powered people and they see you doing great things, they are going to want to help you.

What is your parting advice for BAUCE women?

Charrisse: So many women are going through the same thing that I’m going through — trying to find themselves after a broken relationship or general hardship in life. I’m using reality TV as a platform right now to show other women that no matter how tough your situation is, you can overcome it. You can still rise above whatever obstacle is coming your way as opposed to falling into thinking that you’ve reached the end of your life. You have to find ways to turn things into a positive. Don’t waste time on negative things or negative people. Anything you do — feel good about it! Surround yourself with positive, successful people and that type of energy will come back to you. That’s what I’m doing and that’s what other ambitious women should aspire to do too.