Meteorologist Rhonda A. Lee knows a thing or two about what it means to appreciate and defend natural beauty – both on and off the television screen. In this month’s Bauce feature, we were given the utmost pleasure to hear more from the woman who demonstrates courage, strength and offers caliber to the African-American natural hair and ethnic movement.

Since she was a little kid, Lee always wanted to do the weather. After high school, she attended Kansas State University where she studied Journalism as an alternative because the institution did not have a weather or meteorology department. She continued on that track but always kept her dream vivid in the back of her mind. Before finishing undergrad, Lee applied to Mississippi State University but due to lack of specific educational requirements, she put a pause on her academic pursuits.

“I was never really encouraged to do the weather until I was adult – right at ten years after graduating,” she said. “No one ever said ‘are you interested in doing the weather, here let me help you,’ that never came into anyone’s vocabulary – until I went to Elvis Presley’s house.”

Lee got the chance to go to Presley’s estate while field producing for Fox affiliate in Memphis, Tennessee, where she assisted with a Christmas special at Graceland. The meteorologist who she

worked with, surprisingly, encouraged her to do the weather and insisted she apply to Mississippi State with his help and guidance. It was on the grounds of Graceland that Rhonda finally had the push she needed to pursue her childhood career.

“That’s really why I go out of my way for any school or organization who needs someone as an example to come in and talk about weather because that’s all I needed as a kid,” she said.

After receiving her credentials to become a meteorologist, Lee eagerly started her new career only to face unusual and glaring experiences that shadowed around her hair. During the earlier days of weather reporting in Monroe, Louisiana and then Texas, Lee remembers being asked to “tone it down” and that she was not being paid to be the star of the show, in addition to what she considered (and what very well may have been) “unbelievable racism.”

Despite the premature negativity, Lee continued to push forward and was eventually hired at KTBS 3 News, an ABC affiliate in Shreveport, Louisiana but it was here that Lee faced an unpredictable climax in her  career path, one that reached headlines at various media outlets, including the Daily News and Pix 11.

In 2012, a viewer identified as Emmitt Vascocu, left a comment on the station’s facebook page that the ‘black lady’ [referring to Lee] was nice but needed to wear a wig or grow some more hair” because he thought she looked like a cancer patient. Lee responded to that comment in a professional manner, stating that she was proud of her African-American ancestry, which includes her natural hair.

Following her response, Lee was pulled into a meeting with management where she was accused of insubordination and then let go from her position, even though she previously advised the general manager of the Facebook post and the ongoing issue of controversial statements appearing on the station’s media page. The firing came as a complete surprise since Lee was under the impression that she had the support of her superiors who initially encouraged her to inform them of feedback that rang similar to what she had experienced.

According to the Huffington Post, the station’s management defended their decision to fire Lee due to the fact that she was in violation of the company policy which involves responding to viewer comments. Further, the station publicized an email to employees,  to which Lee was allegedly copied on, offering suggestions to dealing with commentary concerns. But the email represented a suggestion and did not constitute as a formal policy.

“I had no idea that what I was doing was a fire-able offense,” she said. “In fact I volunteered to help form a policy before I was fired and that right there was proof that there wasn’t one.”

After her firing, Lee mentioned that she received enormous national and international support, and stated that she received emails and messages from South Africa and just about every continent, except for Antarctica, of people checking in with their support. Although there were petitions and social buzz in her defense for the incident, Lee had to deal with the idea that she lost her job for standing up for herself. 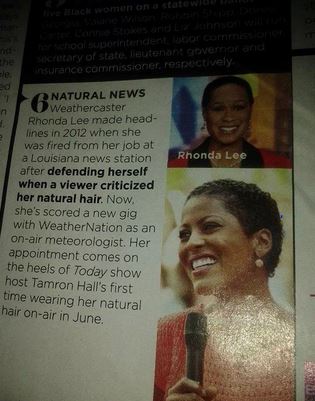 change in the world],” Lee said. “I had accepted it – and thought to myself, ‘that’s not bad.”

It was a considerable time that passed where she was not working, and at the moment when she was going to move on from her career as a meteorologist, Lee excitedly recalls receiving three positions opening up for her in the same day. Her calling was, and is, still evident.

Rhonda Lee currently works as a meteorologist at WeatherNation in Denver. Her experience is a remarkable example that even though things can go great, there is something that interferes, but that interference can very well lead to a favorable outcome.

“I don’t regret any of it, and there was clearly a need,” said Lee. “Now, do I like being the sacrificial lamb – not all the time – but I really feel that there is something celestial that was suppose to happen. Sometimes, I think you are accidentally put into a higher caller and if that’s what mine is I’m hope to give the advice that God wants me to tell somebody.”

BAUCE: How long have you been natural or were you always “a natural?”

Lee: I used to have long, shoulder length hair that I put up in ponytails, a bang, the whole nine yards. It must have been in 2000 I decided I was going to do something new with my hair (and just turning 25). For my birthday I went for a regular haircut and I got the a relaxer and some color. It was short and barely long enough to bump a few curls. I went to Brazil and figured it would be better to have short hair to go in the water and not worry about it.

From summer 2000 and on, it was a very quick transition because [my hair] would grow so fast I would have to go and get it cut a little more, and then I ended up getting it cut a little more until I stopped putting the relaxer in it. Literally it became that one day my hairdresser said that she couldn’t really do my hair anymore. After getting a bit insulted, she turned the chair around and said “that’s why.” I looked at my hair and said “oh my gosh -what have I done?” Then I thought, wow I kinda like it!

Following her unintentional chop, Lee remembered walking down Georgia Avenue in Washington D.C. near Howard University where she caught the attention of strangers with her new hair.

Lee: I was stopping traffic – For me I was elated. I had a guy stop in the street and other people were honking at him…I never forgot that. It was the day I felt pretty and it was the day I felt like a free woman. It was a weird transition but that was also a moment that I never wanted to let go.

BAUCE: What are some of your hair care favorites? 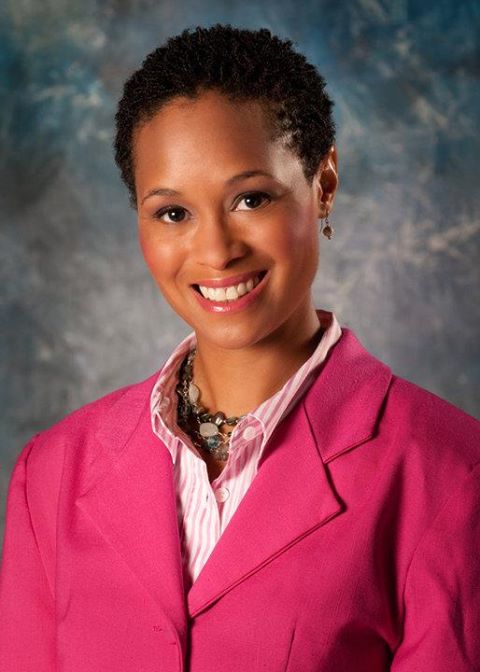 Lee: Water and shea butter works for me. Lately on my and my sons hair I’ve been using coconut oil. Also a sorority sister of mine makes a concoction out of her house and ships it to me, that I love, and both of our hair gets really soft. I have a bag full of samples that people give me and I use ALL of it. I don’t have a best collection – if you send me a sample of something I guarantee you I will put it on my hair to see what will happen. I will say that over the last couple of years I have strayed away from the name brand/manufactured and the reason being is that I remember when they didn’t make our hair stuff. Then all of a sudden [they] realized “whoa – money can be made off of those heads?” and we are thrown a bunch of stuff for us to see what works out, and that can’t be good for our hair. If our hair is natural, I firmly believe that our hair products should be the same way.

Lee: Nah, that’s sillyness. Coloring is one thing but changing the texture is taking away from the natural-ness of the hair. Color can always grow out but relaxing your hair is something that doesn’t come out of your scalp. I don’t want to be too damning for women who do chose to relax their hair.

BAUCE: Where do women in Denver shop?

Lee: I’ve only been here for a little more than a month but this Denver girl shops online. You’ve got to see my shoes, I mean, Carrie Bradshaw would be insulted at my shoe collection and some of them I even bought at a thrift store [laughs]. I keep it natural, all the way down to my toes.

Want professional natural hair tips? Want to know how to break into TV? Or maybe you just want to know what the weather is like closer to the west coast? Follow Meteorologist Rhonda A. Lee on Twitter (@Rhonda_A_Lee), where she answers questions to all of the above!