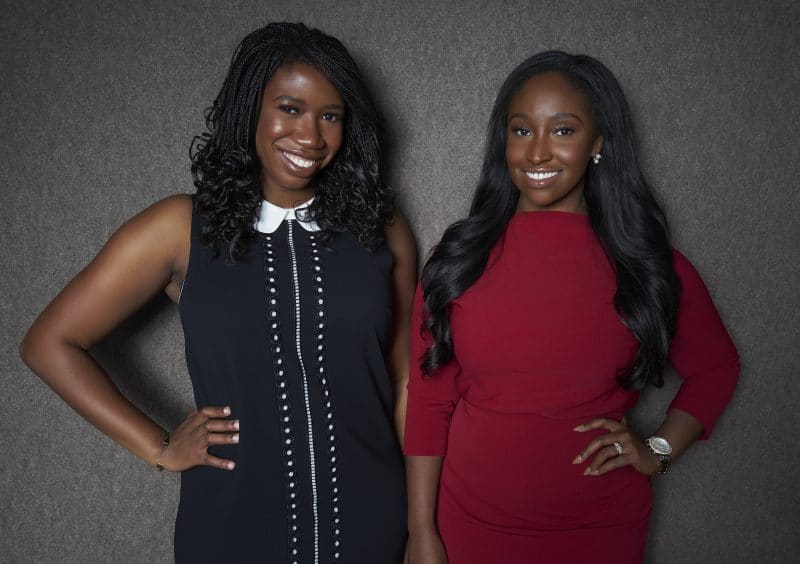 Because black girls deserve a “nude” color too.

Like most accomplished women who built early careers in Corporate America, Kristen Jones (KJ) Miller and Amanda E. Johnson left their cushy jobs in 2012 to enroll at Harvard Business School in hopes of figuring out what their next chapters would be. Upon matriculation, they had no idea that they would end up becoming business partners or that they would soon launch Mented Cosmetics, a premier beauty line for black women, shortly after graduating.

With their combined expertises in retail, KJ and Amanda set on an e-commerce mission to first find (and later create) the “perfect” nude lipstick for black women. In the fall of 2017, KJ and Amanda finally hit a huge stroke of luck; iSeed ventures agreed to invest in their company, allowing them to ascend to the ranks of the few women of color that have raised $1MM in startup funding. In this interview with BAUCE, the founders of Mented Cosmetics share why they highly recommend new entreprenuers seek out funding from venture capatalists before they consider bootstrapping.

Amanda and KJ, you seem like a dream team. How did you two meet?

Amanda: We first met during our first year of HBS. We were both in the HBS show. KJ was a singer and performer in the show, and I was running things behind the scenes. We vibed and joked and got along so well. I don’t think that was the defining moment, but that’s certainly was our first memory.

It was in our second year [at HBS] where we worked on several projects together (like the ASU retreat) that really solidified us as people who had similar senses of humor and interests. By the end of second year we absolutely knew we wanted to do something together.

Going into HBS, did you know you wanted to be an entrepreneur?

KJ:  I very much knew I wanted to be an entrepreneur when I got to HBS. In fact, at that time one of the essays that Harvard had you write was sort of free-form; it basically was a place to tell them something about yourself that you wanted the admissions officers to know.  I wrote about my blog at the time which was called “KJ’s Big Idea”. Every month I would upload a new startup idea and write about it. I just remember that’s what I spent so much of my HBS interview talking about.

Up until that point I had tried to launch a couple of different things. But I will say the difference between what I had done in the past and what I’m doing now with Amanda is just having the right partner and really just having an idea that I’m passionate about. It’s so hard to launch a startup and if you don’t have that passion, you sort of get stuck. That’s sort of what would happen with me with some of the other startup ideas that I had.  I certainly went into business school knowing that this was what I wanted to do; I was just hoping I’d leave with the right idea and the right team.

Amanda, I’m assuming you didn’t have the same admissions story?

Amanda: You’re right — no, I didn’t. I went to HBS really knowing that I wanted to focus on retail and luxury. But I will say HBS absolutely opened my eyes to different career possibilities and one of the things that it did was really normalize the risks and failures of start-ups for me. I think that was one of the great takewawys from HBS for me: win, lose or draw, it is definitely worth while to try doing a startup. And so when I found the right partner and we had the right idea, I knew it was something I wanted to do.

What was one of the first investments you made into Mented Cosmetics?

KJ: We tried to disprove ourselves first. We knew up until that point we could not find a perfect nude lipstick for either of us. The first thing we did was say hey, “Let’s go buy as many new lipsticks as we can and try them out”. So we spent a full weekend buying maybe a hundred different lipsticks from Macy’s and Duane Reade and CVS. We shopped online and we bought everything that we could think of that might work. We looked up videos on how to mix things together and how to use lip liner and lip gloss and lipstick and whatever else to create the perfect nude. We did that project for about a week and spent a lot of money on it. And by the end of the week we were pretty convinced that NO — all of the stuff we tried was terrible garbage. No one has time put on four different products to create one nude look.

But, yes, that research that we did? That was our first investment.

We constantly hear about how startups tend to bootstrap before seeking out funding from investors. Why did you go the VC route first?

KJ: I think we both realized that starting a consumer product company is very resource intensive and so you can either self-capitalize, which we didn’t have the funds to do for much longer than what we did in terms of bootstrapping. You can try to get debt, which is almost impossible when you don’t have a business track record. So, we knew we’d be raising outside funds and for us it was really a matter of who does it make sense to raise the money from. A lot of people immediately think of friends and family. And while we do have a few friends and family in our round, we started with VCs, and I think it’s because we both know everyone knows how risky startups are. We both wanted to have some institutional money or at the very least angel investors with a lot of history on board before we went to family because we wanted to de-risk [the idea] a bit for them.

So, we started pitching to angels and VCs from the very beginning and got a lot of no’s, but eventually started getting some yes’s. And it was after we had our lead investor on board from iSeed Ventures and a couple of different, well-known angels on board that we went to a few of our friends and family and said, look, we really think we’ve got something here.

I tell a lot of first-time entrepreneurs looking to launch a startup that they should raise outside capital first. I just think if you can’t convince someone else to invest in your business, you really have to ask yourself is this a good idea? If you’re the only person willing to invest in it, that’s not a great sign. I do think it’s a good way to understand the vulnerabilities and how viable your business venture really is.

Why do you think there were so many no’s in the beginning of your startup journey when you two were looking for outside investment?

Amanda: I think there were lots of different reasons. I think some are just general to fundraising, which is that everyone wants to know what’s the latest, greatest thing out there in the market. So you can get a lot of meetings, but those meetings are not always going to convert because the industry you’re focusing on is not in their core competency. So some of the no’s were just from people who wanted to take the meeting and hear what we were working on, but knew our idea was not really what they typically invest in. Those type of no’s were a little easier to swallow.

There are also greater conversations that are being had around VCs and women and people of color. There’s a common belief in the startup world that most investors, typically white men, aren’t investing in these subgroups of entreprenuers. If you are the “typical VC” you might not understand the concept of women of color needing a beauty line specifically for them. That’s such a foreign concept for them. They may understand fin-tech and they may understand building some sort of e-commerce platform, but they might not truly understand our pain point.

And so for those people who were willing to think outside of themselves and see this greater opportunity, we got a “yes” or a “I want to learn more”. But I think you hear this problem a lot from women entrepreneurs and people of color. Sometimes it’s difficult to translate the idea into an investment opportunity because the person on the other side of the table only knows what they know and they might not relate to your idea.

Here’s an age-old question: do you believe your MBA’s helped you become better entrepreneurs? Or could you have built Mented Cosmetics without it?

KJ: I think I think that we could have launched a business without an MBA for sure. What Amanda and I bring to the table we learned at our full-time jobs and just learned as a result of being in the workforce. That includes everything from working with suppliers and vendors and agencies, managing employees, all of those things we really learned on the job. I don’t think we needed an MBA for that. With that said though, I think our business is much stronger because we have the network that we’ve built at HBS as well as just the context for a lot of things specific to the startup world and specific to the investor and fundraising worlds. It’s the type of information and connections that you don’t really get access to unless you’re either running a startup or you’re surrounded by a lot of people who have run one and that’s what we had access to through our school. We are stronger as a startup for having our MBAs. But do I think we could’ve done [Mented] without it? Yeah.