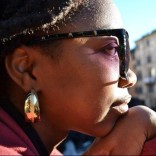 On my body, it seems there are prints, left over from strangers with stray hands. Too often, these strangers are closer than one might think.

A few weekends ago, my school hosted an annual schoolwide social event in which something occurred, something that has been occurring more and more as I’ve gotten older. I was walking around, talking to my friends and fellow classmates. I spotted an acquaintance Steve.* We had a bit of light conversation then he hugged goodbye. Somewhere in this incredibly elongated hug, his hands began to slip down from my mid back straight to my butt. There I was. Stunned. Not only do I go to school with Steve but I considered him a friend.

Sexual advances by peers, colleagues and friends is a subject that has been coming up among my group of friends. Due to my background as an African woman and thus our connections to African males on campus, there seems to be a strange consensus among a specific group of young men that women are up for grabs. These presumptions and subsequent actions are easy to spot and squash.

It becomes more difficult to deal with said advances when they occur within friendships. These incidents are exacerbated with alcohol is used as an excuse for such vile behavior, as it was in the incident mentioned above.

This incident reminded me of the many other unsolicited incidences within my circle of friends. Most of the time, due to age, I and others in my situation felt too intimidated to say anything. A sly comment here, a look there, a wondering hand now and then. At times it seemed, it was simply a small price to pay to be “one of the guys.” Too often I must negotiate these looks and nods and am left to express my annoyance with others.

In this particular instant, I stopped Steve and pointed out to him how inappropriate his actions were. However, I think one of the main reasons I was able to do this is because he was younger and there was already the understanding of black solidarity and the “your country-mate is like your sibling” mentality among Africans on campus.

Breaking the Silence: Why Revolutionizing Women’s Health Starts with Conversation

There are still rigid ideas of harassment, and what constitutes sexual advancement in certain (non formal) sections of society. My sphere as a college student is complicated by the presence of numerous international students from various cultural backgrounds and thus varying ideologies and up bringing.

This is of course not to excuse an unwanted behavior. From my experience, there is still too much silence about what goes on within circles of friends because the term “friendship” conjures up a certain kind of companionship and trust. It can be difficult as well because these incidents are often subtle and, at least I hope, unintentional.

I spoke with Steve a few days after the event. He apologized and said he did not mean to make me feel uncomfortable. This began a dialogue between us and among some of our other friends about what to do when these lines are blurred. It was kind of conversation I hope to never have in the future, but now feel much more prepared to do so.

Get notified about exclusive offers every week!

110 College and Graduate School Scholarships for Women of Color In The U.S.

This Busy Comms Strategist Shares How She Balances Work And Wellness