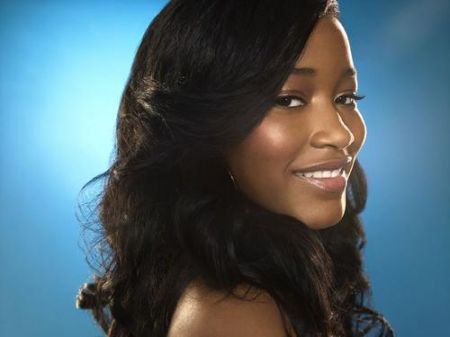 The effects of Hollywood on the young, rich, and famous can be deadly. We often hear about young celebrities being addicted to drugs, “good girls gone bad”, mental breakdowns, and Hollywood scandals. These starlets are often overshadowed by what they have done wrong instead of their talent. There are very few females in Hollywood that can even be considered role models. A young woman we highly regard is KeKe Palmer.

Lauren Keyana Palmer, better known as KeKe, is the 19-year-old acting, singing, designing, and writing diva that has been lighting up our TV and movie screens since 2004. Palmer is a role model to young people everywhere because she is proof that talent and hard work will get you far. She is not riding on a celebrity boyfriend to rise to fame and does not wear suggestive clothing, yet she still receives recognition from the public and her peers. This goes to show that there is still room for clean-cut, respectable girls in the entertainment industry. Her grace is something that we love.

Known essentially for her groundbreaking role in Akeelah and the Bee, KeKe has since starred in many other movies like Jump In and Joyful Noise. She even has her very own show on Nickelodeon called True Jackson VP and used her bauce mentality to start a Wal-Mart clothing line based on the show. This young woman has already accomplished a lot of things and she has many more years ahead of her. Also, did we mention that her looks are on point?

Nowadays, there are very few working African-American actors and actresses that haven’t been subjected to menial or sexified roles.  Palmer, however, seems to consistently shine and is the topic of many conversations about the who’s who of Hollywood. KeKe is a role model for that little girl that wants to be an actress but is afraid because she does not see anyone that looks like her. Indeed, Ms. Palmer is one of those rare young women in Hollywood whose talent overshadows anything else she does outside of her work. She’s breaking into music and we’re loving her new sound.

In addition to all of her ventures, KeKe still finds time to give back to the community. She works with the Boys’ and Girls’ Clubs of America’s “Cool To Be Smart” program, speaking to children about the importance of learning. She is also a supporter of Urban Farming and the Girl Scouts. Palmer has also worked with the charity YWCA and Saving Our Daughters program to empower young women and help eliminate racism, sexism, violence and bullying. She does it all humbly, not making a big show of her charity work. She is low-key about her charities unlike others who wear it as a badge to look good.

Humility is KeKe’s forte and something for many young girls to look up to.  What I personally believe is most admirable about Palmer is her ability to stay so strong in an industry that tears up innocent young girls and steers them wrong. There is never a moment where you see her on TMZ drunken over at a club or on the front page of gossip sites smack-talking anyone else. She is simply ahead of her time and a classy young lady that is very grounded (thanks to her parents), and someone that even a few older adults could learn a thing or two from.

Keke, you are truly a bauce. Stay fly, fierce and on your ish.