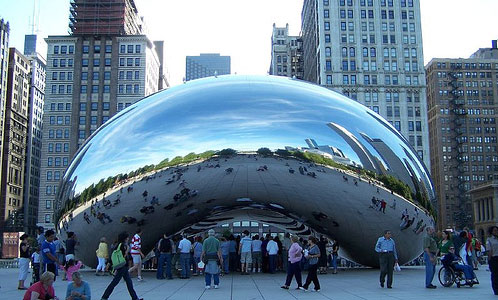 Getting ready to say bye-bye to your alma mater this May and hop on a plane to the next chapter in your life? It can be both an exciting and daunting time in your life, but one that can be transitioned into easier by getting a leg up on the right information before you leave school. If you have a place to stay (the ‘rents) while you think about it or work on that next move then don’t despair! This information on the best places to land your next gig will definitely come in handy. Gradspot.com shares the top ten locations to launch your post-grad career!

A sprawling metropolis with a southern swagger, ATL is where pop culture phenomena are made. Coca-Cola ships out its sweet elixir by the truckload, and music industry players (especially R&B and hip hop) scour clubs for the next big thing. Despite a slow, Southern pace of life, the city has plenty of ways to keep recent grads occupied at night, including bar-heavy Buckhead and lounge-heavy downtown. If you ever get bored, leaving town is an easy option—Savannah and Charleston are just a road-trip away, and Delta’s Atlanta hub is the busiest airline hub in the world, offering affordable flights to almost anywhere.

Major Industries: Big business (e.g., Coca Cola, Home Depot, Delta)
Climate: Semitropical, with long and humid summers (Winter—45°F, Summer—78°F)
Transportation: The MARTA train system gets mixed reviews but is functional for most major areas. However, a car certainly adds a ton of convenience.
Closing Time: 2:30AM
Professional Sports: MLB—Braves; NFL—Falcons; NBA—Hawks; NHL—Thrashers
Famous Foodstuffs: Fried chicken, sweet tea, and Krispy Kreme
You’ll love it if… you want a city where affectation will get you smacked the F up
You’ll be miserable if… you hate traffic and R&B
Best Thing Ever: Affordable housing still exists, and there’s a possibility that it’s really just like this
Worst Thing Ever: Never-ending urban sprawl

Ever the town for movers and shakers, DC is riding the wave of excitement ignited by the election of Barack Obama. It’s often said the dynamics of the town shift according to who’s in office, particularly during the summer when the nation’s capital is flooded with party-hardy interns. If you are coming from a large city, D.C. can feel comparatively small and segregated, but it is also rife with young people in politics, academia, and journalism (a plus for guys: women outnumber men by about five to four). Whether Obama will bring a spark of energy to his new home remains to be seen, but you certainly wouldn’t be crazy for wanting to find out.

Major Industries: Government, non-profit
Climate: Four distinct seasons with hot summers (Winter—30°F, Summer—80°F)
Transportation: The DC “Metro” system is famously clean and efficient, and it will get you most places you need to go. However, stations close at 3AM on the weekends (midnight during the week) and cabs are expensive, so some complain that going out can be a pain.
Closing Time: Su-Th 2AM, F-Sa 3AM
Professional Sports: MLB—Nationals; NFL—Redskins; NBA—Wizards; NHL—Capitals
Famous Foodstuffs: Chili half-smoke (made famous by Ben’s Chili Bowl)
You’ll love it if… you’re an aspiring politician or academic who thrives on youthful naïveté
You’ll be miserable if… you can’t stand arguing and want a “big city” feel
Best Thing Ever: Bountiful green space
Worst Thing Ever: Political blowhards and people who use the phrase “inside the Beltway”

Everyone in L.A. thinks his or her life is like Entourage, and for a select few, that’s actually true. Others do their best to fake the funk, talking their way into various parties and hoping against hope that they are seconds away from “blowing up.” But L.A. stands as a testament to the idea that weather really does matter—people are happy, beautiful, and relaxed. They leave work early and go to the beach year-round. So can anyone really blame them for loving their mirage of a city?

The Texan credo of “bigger is better” certainly applies in H-Town, where you can hop in a car and go to the awesomest strip malls in the world. If cowboy hats, leather boots, and gun stores give you the creeps, then stay home. But the open-minded are rewarded with great restaurants, a relaxed vibe, and some unique offerings, like the laidback Rice University area and NASA’s headquarters. Plus, who wouldn’t want to live in a place that nicknamed itself “Clutch City”?

If you’re someone who needs open space, Denver is a great launching point for all sorts of outdoor activities, from hiking and biking to skiing and snowmobiling. But it’s not just an oversized ski town. Big business, Coors Brewing Company, and the largest population of federal employees outside of Washington, D.C. all call the “Mile High City” home, and downtown Denver has seen successful revitalization efforts in recent years. On top of all that, it was the site of what was arguably the best season of Real World in recent memory, so you can’t discount that.

Major Industries: Energy, government, and finance (“Wall Street of the Rockies”)
Climate: Fair amount of precipitation, including snowfall from October to April (Winter—31°F, Summer—72°F)
Transportation: A light rail connects downtown with the suburbs, but you’ll want a car to explore the great outdoors.
Closing Time: 2AM
Professional Sports: MLB—Rockies; NFL—Broncos; NBA—Nuggets; NFL—Avalanche
Famous Foodstuffs: Steak
You’ll love it if… you want every weekend to be an outdoors adventure
You’ll be miserable if… the thought of going for a hike makes you want to die
Best Thing Ever: Rodeos
Worst Thing Ever: Insanely slow drivers

If you like sports and fratty behavior, Beantown may be the place for you. With tons of history and a recent spate of championships, the town’s sports teams drive the daily conversation, which generally involves the use of strange accents. Moreover, “America’s College Town” is packed with students who populate the bars and/or drink terrible beers in dorm rooms throughout the city. Though not always the most vibrant of cities, Boston is very livable. There are some wonderful museums and historical sites, and few things beat a run or walk along the banks of the Charles River in spring.

Major Industries: Consulting and venture capital
Climate: Four distinct seasons with cold winters (Winter—30°F, Summer—72°F)
Transportation: The “T” system and buses will get you most places, but most lines shut down by 12:30-1AM. A commuter rail serves the ‘burbs. (Subway fare: $1.70)
Closing Time: 2AM
Professional Sports: MLB—Red Sox; NFL—Patriots; NBA—Celtics; NHL—Bruins
Famous Foodstuffs: New England Clam Chow-dah
You’ll love it if… you’re a beer-swilling, sports-loving type with a blue-collar streak (aka you like Dunkin Donuts more than Starbucks)
You’ll be miserable if… you hate being cold and can’t stand college students (because they remind you of all your regrets!)
Best Thing Ever: The Boston Marathon
Worst Thing Ever: Red Sox fans

New York City is Mecca for many recent grads looking to live the Twentysomething Dream. “Work hard, play hard” is the motto many live by, putting in long hours at the office and partying when the average person would wisely choose to go to bed. The yearning for success—that old “if you can make it here, you’ll make it anywhere” attitude—is almost tangible, and while some feed off the energy, others find it exhausting. The transient hordes and uber-competitive real-estate market contribute to this restless energy, but if you can keep your own goals in sight, New York can be whatever you want it to be. Being bored is not an option.

The Pacific Northwest often gets a bad rap as a place where ugly, granola-eating freaks get rained on a lot, but those who live in Seattle have compelling evidence that it’s a perfect city for recent grads. The surrounding area is beautiful, offering great skiing in the Cascade and Olympic Mountains, as well as tons of hiking, mountain biking, and mountaineering opportunities (there’s even a biking terrain park underneath the I-5 freeway). Tech geeks, beer nerds, and outdoors mavens live together amiably, chilling at the incredible REI flagship store and thinking about what it would be like if Kurt Cobain were still alive.

Major Industries: Big-biz technology and tech-related venture capital
Climate: Generally cool with lots of rain (Winter—41°F, Summer—65°F)
Transportation: Hop in the whip and prepare for traffic
Closing Time: 2AM
Professional Sports: MLB—Mariners; NFL—Seahawks
Famous Foodstuffs: Fresh fish
You’ll love it if… you’re a tech genius who moonlights as an extreme skier
You’ll be miserable if… you’re like Missy Elliott and “can’t stand the rain”
Best Thing Ever: Some of the freshest coffees in the world
Worst Thing Ever: Traffic jams

Situated in the beautiful Bay Area, San Fran has a “best of all worlds” vibe that attracts recent grads in droves. Whether running along the waterfront or taking a bike ride across the Golden Gate Bridge, San Franciscans enjoy their city and its outskirts year ’round. Meanwhile, a thriving arts scene, diverse population, and distinct neighborhoods keep things interesting. The prominence of tech and web companies in town and in nearby Silicon Valley contributes to the youthfulness of the city, but be prepared to fork over a pretty penny to live in California’s most expensive city for renters.

Major Industries: Technology (from computers to health), venture capital
Climate: Four seasons but not too extreme in summer or winter (Winter—48°F, Summer—64°F)
Transportation: BART connects San Francisco with Oakland and Berkley, and a MUNI subway line runs in the city. Not all parts of the peninsula are close to public transportation, but it’s pretty small and getting around with buses and cabs avoids the terror of parallel parking on steep hills.
Closing Time: 2AM
Professional Sports: MLB—Athletics, Giants; NFL—49ers, Raiders; NBA—Warriors; NHL—Sharks
Famous Foodstuffs: Seafood from Pier 39 and Mexican in the Mission
You’ll love it if… you’ve got an “alternative” streak that you want to foster in a city that embraces difference
You’ll be miserable if… you’re a backwards Republican who despises homeless people, gays, and immigrants
Best Thing Ever: A highly amusing assortment of crazy people
Worst Thing Ever: Walking/biking up hills

The jewel of the Midwest combines cosmopolitanism with a refreshing dose of hospitality, catering to those who like city life but don’t like the “f*&k you, a*^hole!” mentality of places like New York. There are few big cities that are prettier than Chi-Town, which offers a mix of leafy neighborhoods, an architecturally stunning downtown, and a gorgeous lakefront. Tons of bars, live music, and museums keep recent grads entertained, but beware: The winters are not for the faint-hearted.

Major Industries: Aerospace, finance, and consulting
Climate: Four distinct seasons, but beware of freezing winters (Winter—28°F, Summer—74°F)
Transportation: The ‘L’ and buses will get you where you need to go (Fare: $2.25)
Closing Time: Su-F 3AM, Sa 4AM
Professional Sports: MLB—White Sox, Cubs; NFL—Bears; NBA—Bulls; NHL—Blackhawks
Famous Foodstuffs: Hotdogs with the works and deep-dish pizza
You’ll love it if… you like your big city flavor tempered with a dash of Midwestern hospitality
You’ll be miserable if… you are suspicious of nice people
Best Thing Ever: The coolest architecture in America
Worst Thing Ever: The wind off Lake Michigan