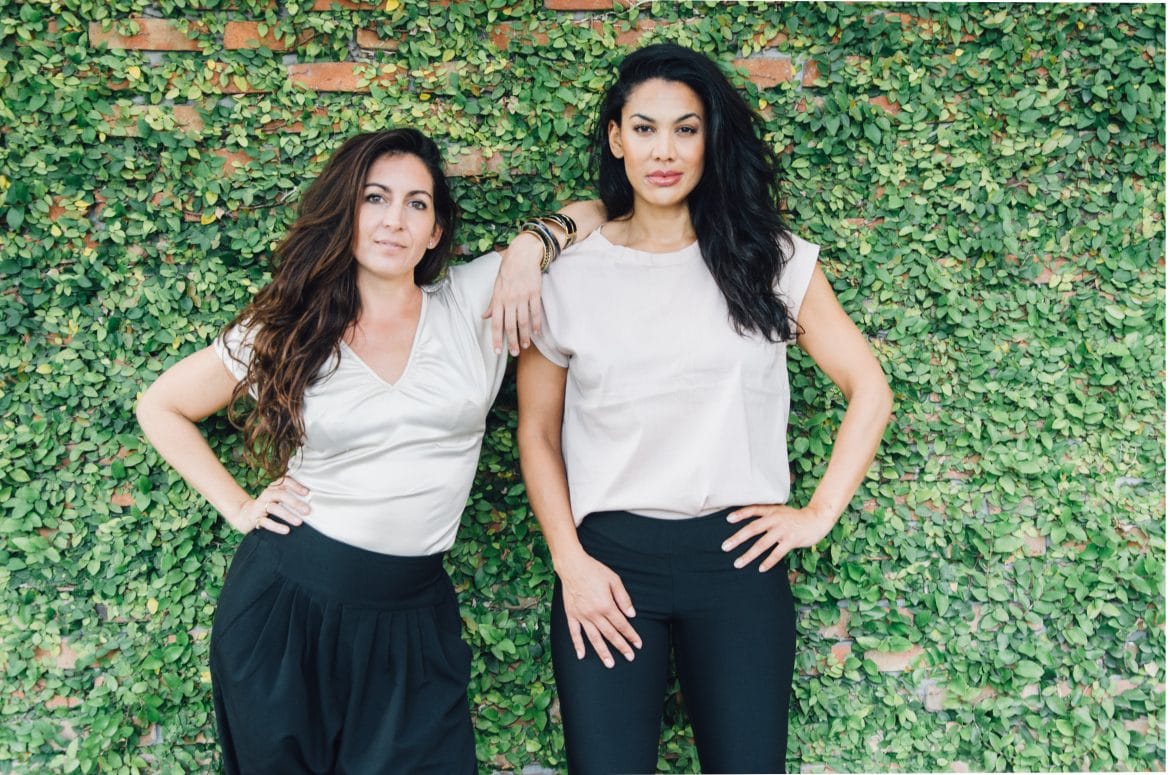 When you hear the way that Rosario describes her co-founder you’d think they were blood sisters that have known each other forever. “She’s just so much more elegant with words than I am,” the veteran stylist and designer told us in an interview. The women share an energetic, best gal-friend partnership that would even make Oprah and Gayle blink twice.

Meet Rosario Chozas and Julia Ford-Carther — the two women behind the comfortable yet chic professional clothing brand, BAMMIES. The Miami-based company, which was founded in 2015, debuted with much internet fanfare for its clever “business jammies” or ultra comfortable workwear that give urban girls the feeling that they are going to work in a set of classy PJs. In this interview with BAUCE, Rosario and Julia share how they created a profitable clothing line that empowers women and makes workwear cool again.

Finding a co-founder for a company can often be a challenge. How did the two of you meet?

Rosario: At the time Julia and I met, she was senior editor of Ocean Drive magazine and I had co-created and was directing a women in technology innovation summit in Miami. I was focused on teaching leadership to female leaders in the tech and design space. My organization had started a talk series to continue community engagement throughout the year and support female leaders in the community. To kick off the series, we did a talk about the power of digital media and Julia was the moderator. We met and we fell in love and clicked on all the levels! We decided to grab coffee outside of all the serious conference calls we had been on and just hit it off.

As part of the planning, I was required to be in offices all the time which was very different from being a wardrobe stylist for commercial lifestyle shoots and fashion shows and film sets. It felt way more corporate for me and I felt very foreign. So when I met with Julia to have coffee, I told her that I had started designing a collection of clothing for myself that allowed me to feel comfortable with who I was. I wanted clothing that wouldn’t make me lose my identity and my creative spirit. I had started dressing more comfortably and people would complement my look. I would joke and say, “I’m just wearing my business jammies – these are my bammies.”

When I told Julia this idea and that it would be cool to do a line of comfortable clothes, Julia was like when you’re ready to take this to the next level let me know. I thought on it for a while and then another coffee meet up later we said let’s do this, high-fived and never looked back!

It feels like there is a synergy between a woman’s confidence and what she’s putting on her body everyday. Julia, would you agree that there is a connection between fashion and what people feel about themselves?

Julia: Absolutely. I have always had an affinity for women’s lifestyle subjects because of that exact reason. A lot of people think it’s a really superficial thing when you’re talking about hair or beauty or skin care or fashion and it’s really not. It comes down to self-image and how you view yourself as an individual and in the collective in your various roles of your life. You want to feel comfortable enough to accurately express your authentic self. I have a personal belief that fashion is a strong way to do that. It really is a language. It’s a universal language in regards to self-image and clothing because we have to get dressed every morning.

It’s been really interesting in partnering with Rosario because she takes what I know to be true from an emotional and metaphysical standpoint with EQ and self-love and turns it into color and structure. She has a great sense of fashion knowledge; she can construct an outfit that coneys an emotion that says exactly what you want it to say. We’re not just selling a product, we’re selling an emotion and you’ll see that in our branding, communications and the details. Every piece of clothing has a woman’s name and a feeling associated with it. For example, our blazers are “100% cotton and 100% powerful”; that feeling of being a powerful woman is woven into every composition of the fabric.

So when did the two of you realize that BAMMIES was a profitable idea?

Julia: There were a few moments. Rosario had the idea and it took six months to go from idea to execution. I thought it was great idea because when I worked at Ocean Drive Magazine we had an office filled with 95%  young women and they all were wearing some variation of this style that we were seeking to create. That office of women was my mini-test group.

As Rosario explained, when we launched, the hook of “business jammies” spread like wildfire. It started with a few articles and it snowballed from there with other press. We just got this burst of attention, sales, traction and emotional responses. We were getting emails from women that were excited about it: “This is how I dress – I’ve been waiting for something like this!” and in particular we got communications from women in the plus-size market that wanted to see our clothes in plus-sizes. We realized there was something there; we were selling confidence and self-love in fashion and we realized that we needed to extend it to everyone and make it something that everyone has access to. We pulled the trigger on our plus-size offering a lot sooner than we anticipated.

We thought we were going to hit it right with the millennial urban women in creative fields, but BAMMIES was hitting it with everyone. Our customers were moms in Arizona and people on the sneaker circuit in Australia and people in the medical field in Chicago. That was a real surprise and that’s when our ears perked up.

Rosario: We launched on a pre-sale and we told everyone we knew that we were self-funded  and we were doing this thing. We incorporated the business, we got a website and did a photo shoot to drive sales. We got picked up by lots of national press. I think when Mashable did a piece on us – we knew it jived with people.

Wow. So what has been the biggest challenge with running a fashion business? I mean, it can’t be cheap to start a clothing line, right?

Julia: It is absolutely capital-intensive and it never stops, even when you try to have lean inventory. This is why pre-sales comes in real handy because you know which orders you should place so your overhead costs on inventory aren’t too high. But you can’t just raise enough money to go forward with your first production — you always have to be raising money whether it’s through revenue or another form like a cash injection of some sort. It’s a constant cycle where you have to be raising enough and your margins are strong enough so you have enough to re-invest in your next season or next inventory buy. That cyclical nature of the business is real and I don’t know if everyone considers it.

With beauty products you can roll a couple of products out in separate launches and you don’t have to do an entire collection at once. Fashion’s not like that. You have to be comfortable in raising capital all the time. We have bootstrapped and  been self-funded this entire time. We’ve done two small friends-and-family fundraising rounds but other than that most of the money has come from our own pockets.

How do you successfully raise money from your friends and family? Sounds like you have great friends!

Rosario: It’s very similar to going  to a bank and asking for a loan. If you have friends and family that have capital that they don’t need to utilize and you present your business idea in the exact same matter, then that’s the best way to do it because you can have more favorable investment terms. Just like you’d go to a bank and show them your business plan and how the money will be utilized and all those formalities. It’s like the same thing but instead your saying, “Hey, Aunt Sally…you are going to charge me less interest than a bank would or we can work something out.” The key is asking the right friends and family! [Laughs].

What would be your advice for someone who wants to create their own fashion line or venture into entrepreneurship?

Julia: My advice for any aspiring entrepreneur whether they are fashion-based or not is that it always starts with knowing your why. [Entrepreneurship] is not easy. Success doesn’t happen overnight. There is so much saturation in the market. You probably won’t even know how saturated the market is until you start your business. Then you need to know if the problem you’re envisioning to solve truly exists or is it just a personal issue? Is it scalable? If there are only 10,000 people who have this particular problem then you have capped your market and there is nowhere to go beyond that. Does your idea have traction beyond a hyper-niche demographic? If so, who are your competitors? What are you up against? These are all the questions you might not know  until you get in it.

So, you have to know your why. That is the purpose behind everything you do. That’s what carries you through. It’s not your passion because that’s going to die out from time to time. It’s not your intellect or your hard skills because you are going to need those plus 18 other hard skills. You’re going to be doing things you don’t want to be doing especially if you are launching your business startup style. When it feels like the money is all gone and nothing’s working and you are all by yourself — you have to connect to that purpose so you’ll be able to get up and keep going.

[Tweet “”You have to know your ‘why’. That is the purpose behind everything you do.”-@JustJFC “]

Rosario: Isn’t she great with words? [Laughs]. When you find the why — then you have to go out there and do it. Surround yourself with people who can help you do it.  There’s no “one” way to be a successful entrepreneur that’s better than another. You find your mission, you find where your heart is and your head aligns to it and you just do it. It’s not as big and scary and weird as we all think it is. You have to take shit seriously, go out and try to partner up with people who can help you out. If a design doesn’t work out, re-design it. If you run out of money, go raise some more. As Julia said, the why will sustain you. The doing is what is going to make you happy and successful.