You can do anything that you believe in.

When Evita Robinson graduated from Iona College in 2006, she had no idea that in a few short years she’d be leading one of the biggest travel tribes for people of color. She originally left school with her communications degree and a one-way ticket to Europe, with hopes of one day landing a steady job in the film and media industry. But then she got bit by the travel bug, which, coupled with her film production skills, led her to launch Nomadness TV, a visual documentation of her solo travel experiences as a woman of color. The travel web series later morphed into Nomadness Travel Tribe An online social community for urban travelers seeking like-minded companions to connect with around the world. Nomadness still holds the title for being the leaders of the  ‘urban travel movement’.

In this interview with BAUCE, Evita opens up about how she organically grew her online community and how Nomadness continues to differentiate itself in what is now becoming a saturated market for urban travelers.

What inspired you to start Nomadness Travel Tribe early on?

Evita: Six weeks after I graduated with my undergrad degree in television and video production I moved to Paris to do a filmmaking workshop for half a summer with the New York Film Academy. I was pretty much just shacking up with one of my best friends from middle school through high school who was also out there on a different program for her university. It was really the first time I was combining art with travel, and d for me, it was extremely eye-opening. It was a rigorous program, especially towards the end of it. We were doing multiple films every weekend while taking intensive courses from nine to five every single day. It was invigorating and awe-inspiring and exhaustive. But it really was the trip that lodged the travel bug underneath my skin and laid the foundation down for what was what I didn’t even realize at that time was going to come and eventually turn into Nomadness. After moving back to New York, after fulfilling the workshop with the New York Film Academy, I got into some freelance gigs here. But shortly thereafter, about two years later I was I got accepted to go teach English in Japan.

It was actually while living in Niigata, Japan where I got the idea for Nomadness and a lot of people don’t know it started as this really shitty web series. I had a janky camera and my pirated Final Cut Pro, and I was really just video taping my life with what resources I had while living in Japan for a year, traveling around India and various places while I was out there as well. And that was the first time that anybody had heard the name Nomadness. At that time I wasn’t really looking for a name and a brand, but really a home because I wasn’t seeing too many people who looked like me that were out there traveling and having their travels documented.

When did you realize this vision that you had was bigger than you? When did you say to yourself, ‘Hey! I’ve got something here!’

Evita: It was actually really early. I had started at Nomadness in September 2011, and there’s a ton of groups that are out now that are kind of vying for the black millennial audience. But when I started, we were the first. And so it was very interesting kind of navigating that space — seeing what [our members] needed and what they wanted. But it moved by word of mouth so fast. When I created the tribe, the first hundred people I put in were people who I had met on travels. They were friends of mine. They all had at least one passport stamp. I knew they had traveled around the world and respected traveling and were very supportive of the Nomadness lifestyle, so I put them in the group. The wave of communication really took off in an alarming way. It was like whoa! At that time, I was still kind of freelancing. [Nomadness] was taking time away from what I was supposed to be doing at work, and I would end up having to stay late because I was in this constant state of engagement with new tribe members. We had our first in-person meet-up in New York City on October 16th, 2011.

We had our first in-person meet-up in New York City on October 16th, 2011. Nomadness was maybe like three years-old and we had about 40 people come out to this thing — and to see that many people come out?! To see these many people who didn’t know each other and didn’t really know me? There was something so transformative about that. At that event, I really had a couple of moments of pause where I just kind of looked around. I just watched them and watched their engagement and was like, wait a second — there’s something’s here. I don’t know what this is, but there’s something here. And that was the first moment that I really started to take it seriously. I wanted to see what could happen if we made it grow. Seeing that there was an engagement that was very tangible when people got together drove me to want to encapsulate and represent that energy as well.

So, word of mouth was your biggest driver for growth? You didn’t have to spend money on Facebook ads to promote Nomadness?

Evita: [Laughs] No! They didn’t even have Facebook ads when I started Nomadeness, so that wasn’t even an option! I mean, we’ll do Facebook ads for like events and stuff now. But I say this all the time. For somebody who’s never had a PR rep, I’ve got some damn good PR. We’ve gotten in the New York Times, MSNBC, Entrepreneur magazine — we’ve been all over the place, and I’ve never had a PR representative for that. That’s because we’ve built the type of community that people want to talk about. With Nomadness Tribe members, there’s a sense of loyalty and respect that they have for the community and the way that we navigate it and the way that we nurture it.

[Tweet “‘For somebody who’s never had a PR rep, I’ve got some damn good PR.’ @evierobbie”]

Our first trip was in January 2012. And on that trip, we had a magazine writer join us who I found out, after the fact, was pretty much documenting the excursion for a pitch that she had thrown out to a publication. A couple of months later, we landed in Ebony magazine and then from there it just took off. I had been in blogs up until that point. But once the Ebony magazine article came out, it was kind of like, OK, now is go time. And that gave us a sense of legitimacy I think on a broader scale. That’s when I had to start making business moves, and I realized chick, you did not just create a place for you to vent as a traveler of color. Like, you’ve actually created an entity — a worldwide community. You’re beginning a movement, and you’re also beginning a business. And those were things that I did not sign up for or have the intention to create when I started Nomadness. They just came, and I said yes to them along the route.

There are a lot of new travel tribes emerging that may or may not have been influenced by Nomadness. What is your differentiation factor? How do you keep Nomadness relevant given this millennial obsession with travel right now?

Evita: The familial community aspect and the leadership — those are two big things that stand out. The thing is I’m very involved with Nomadness. I’m not like a CEO that kind of sits behind the logo. I’m very much the face of the brand. I’m as much a member as I am the person that has created it. And I engage as such. I say all the time like I’ve been with these people through triumph and tragedy. I’ve been with them when we’ve had our first tribe babies from members who met because of Nomadness, and I’ve attended funerals of my members. So, there is something very powerful and authentic to the fact that I’m as involved and that these people look out for each other in every single aspect.

It’s not just about taking a trip. It’s not just about taking an online class. It’s about the people and the relationships that we are actually fostering both on and offline every day. When I created Nomadness, I didn’t want to talk about like “the top 10 places to go eat in Italy”. I wanted to know why my relationship that worked long distance was fucked up now that I was home. Like for real, for real. And so from conception, it has always been something that is more intimate, it has always been something more personal. Creating Nomadness as a safe space for people has been a part of the mission from the jump, and that’s why we were the first ones to start doing the group trips. Then everybody started doing group trips.

Now we’re like, yo’ guess what? We’re not doing group trips anymore. Now we’re doing immersive pop-up events in different communities. Now it’s not even so much about us going out there. It’s about creating activations in these places that bring out the locals in droves so that we now have a more substantiated cross-country and cross-cultural experience. It’s not us just coming into a country, using their resources, having a good time while executing an itinerary over a weekend, and bouncing. We aim to do more. 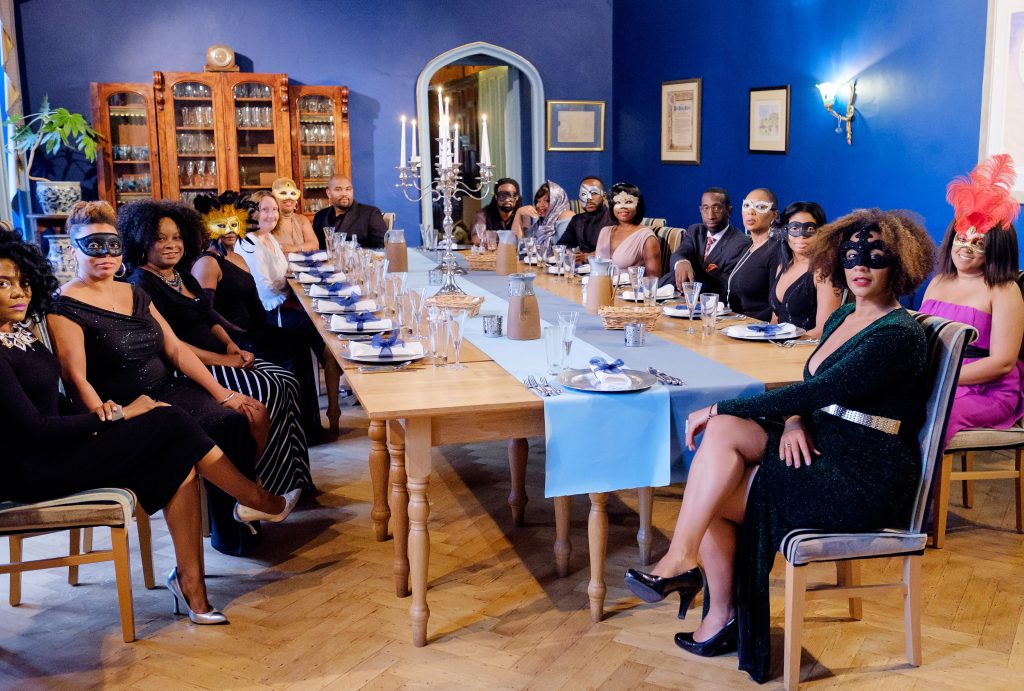 What is the biggest challenge you would say you have when it comes to running your business?

Evita: I think it’s always, and I think this is probably the case for any business, just having great people as far as help. and continuing to grow your consumer base as your business changes over time. Nomadness doesn’t look the same way that it did when I started it almost six years ago, and thank goodness for that. It would show a lack of innovation and a lack of change and growth. But making sure that the right people are aligned with the mission and with the growth as it happens in real-time. That’s definitely a challenge.

Wow, you all are really switching up the game.  So what’s next for Nomadness, Evita?

Evita: We have a huge community now through Nomadness. But now we’re talking about “rooting.” I am creating the next funnel system that’s empowering travelers of color to start acquiring property abroad. I want my tribe members to feel like they can really make a change, you know? Not just in their lives, but also in the lives of the people who live in the places that we enjoy and that we frequent so much. That’s really what’s next for us. We’re always about innovating and kind of being the first in the jungle with the machete trying to see what the next step is for the culture.

Want to keep up with Evita’s daily adventures as a BAUCE in real life? Follow her on Twitter and Instagram to get the ltest scoop on what’s up next for her and Nomadness.