I’m excited to share my experience covering the 2018 Black Women In Media (BWIM) Conference and Awards on behalf of BAUCE Magazine, in which BAUCE was a partner, and was held in New York City at Microsoft in Times Square on March 28th and 29th.

Though I’d have loved to attend every panel and workshop offered, there were too many – often held simultaneously, to make it to each one, let alone describe all I did attend (view the full list of 2018 panelists and speakers). However, I’ve compiled a rundown of some the top BWIM-featured women, nuggets of their insider tips, a handful of awesome women-owned businesses to support, BWIM shining moments, and where to find them all online. 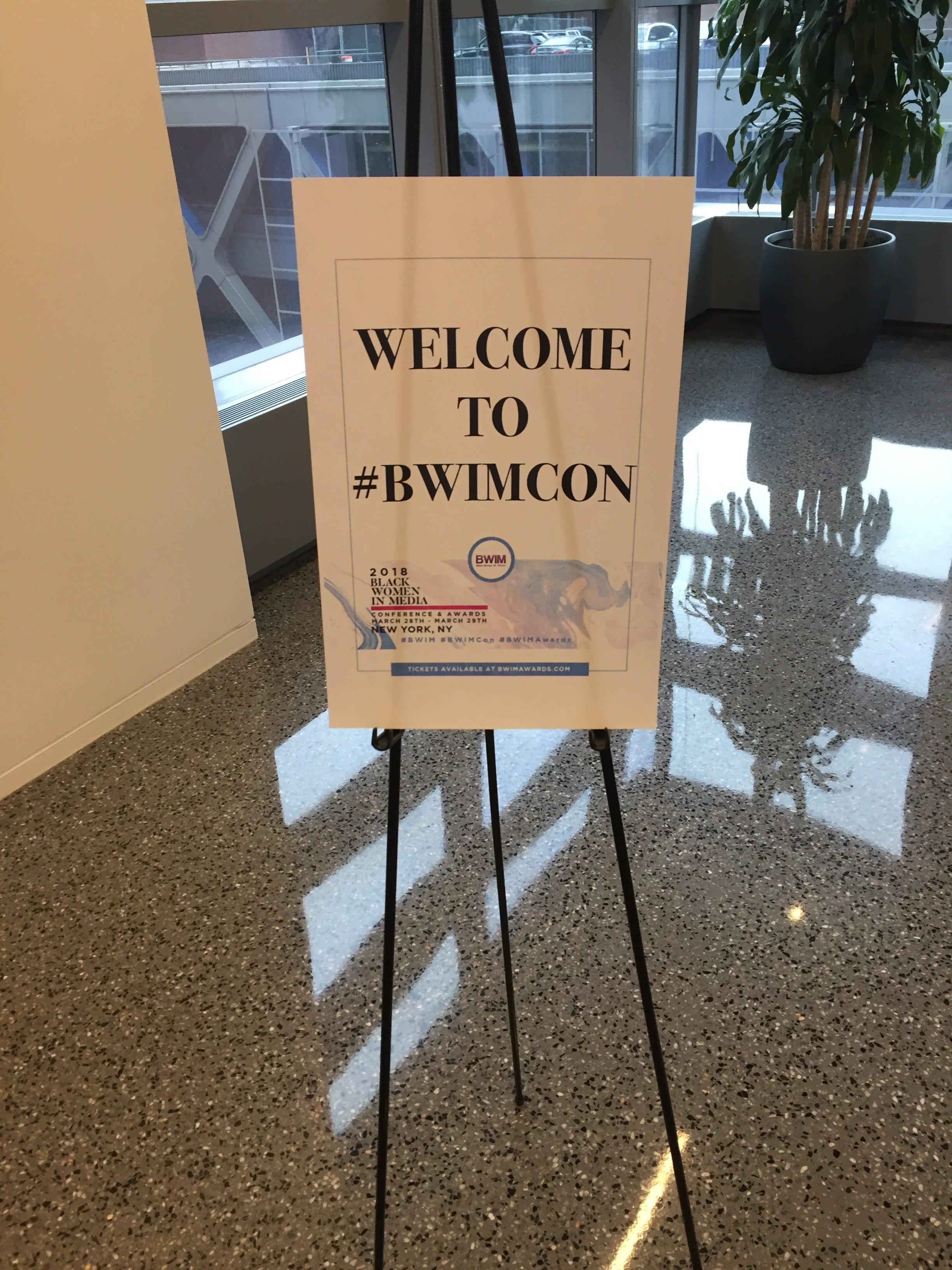 Dr. Stacie NC Grant, Empowerment Specialist and Event Strategist, provided BWIM’s opening conference remarks. Dr. Grant empowers individuals to create behavioral shifts in their productivity, enabling them to identify and purge distractions in their lives to help them take immediate action on their goals and dreams.

In her remarks, Dr. Grant asked the women in the room to “imagine the person we are going to be in 10-15 years, and whom we’re holding the space for in the future… There’s going to be a young woman who hears about what you’ve done or created…what is it you want them to say?”

Judith Jacques (Twitter & IG: @judithjacques), CEO & Founder of BWIM and BLACK STREET, addressed and thanked conference goers and award show attendees alike. BWIM was conceived by the need for black female representation in media, and works to inspire women in our community – recognizing those breaking past barriers and prejudices to dominate their respective fields.

“I wanted to show future generations, as well as my peers and ground-breakers that we notice you, and we know that you have contributed much more than the media is portraying to outside communities,” said Jacques in a sit-down interview with Ashlei Stevens (Twitter & IG: @ashlei_stevens), Media Relations Director and award-winning media professional.

Jacques shared her professional and personal journey including raising her two children (12 and 2 years old), in addition to obstacles that shaped her success – enduring a battle with cancer (she is now in remission).

“We have to be very careful with how we judge each other, and how we treat other people because you can define for them who they are. I start believing that what so and so believes I am – that’s what I become. So if I speak life into you, you have life, power, you’re beautiful, you grow. But if I speak death into you, then you dwindle and die,” said Jacques.

Michele Thornton Ghee (Twitter and IG: @stratechic) is currently SVP of Media Sales for BET HER (formerly Centric TV) as well as an author of multiple books (Read Stratechic: Life and Career winning strategies for women!), dropped multiple professional gems as a BWIM Communications panelist and awards honoree. Thornton Ghee described her come up in the corporate and entertainment business, as well as being prepared, and having a thick skin to keep from giving up in the face of denial and adversity.

“When I didn’t get promoted I didn’t get mad – I got busy… I decided to understand what the (company’s) mission statement was,” said Thornton Ghee.

Christine Michel-Carter (Twitter & IG: @cmichelcarter) is an award-winning global marketing strategist, and thought leader for marketing to millennials, mothers and black consumers. Michel-Carter regularly contributes to Forbes, and has been profiled by The New York Times, Ebony and Women’s Health, as well as partnered with brands such as AARP, ALDI, Chicco, Goodwill, 23andMe, OtterBox and others.

(Topic: Professional Mentorship) “I always wished I could have a mentor, I grew up in a really small town – Dover, Delaware… In my mind I was a big fish in this little fish tank… I did meet what I call Angels along the way, who believed in me, saw what I was doing, and maybe just made an introduction (to a news director etc.)… They might have said ‘I want to make a phone call for you’ – a lot of times it was a white man, said Trigg-Jones.”

Dulcé Sloan (Twitter & IG: @dulcesloan) is a comedian and actress, as well as the newest Correspondent on The Daily Show with Trevor Noah. Sloan made her late-night debut last year on Late with Conan O’Brien and her daytime debut as a “Comedian You Should Know” on the Steve Harvey Show. Sloan can be seen on Greatest Ever and Comedy Knock Out on truTV.

(Topic: Professional Mentorship) “At a certain point you grow out of a mentor. You can’t hold on to this person for dear life… The mentor I had, who brought me into stand up (and covered my comedy classes), mentored me from 2009 to 2013 – then it got to the point where he said ‘you don’t need me anymore,’” said Sloan.

Angel Rich (Twitter: @BlkTechMatters), is the CEO of Wealthy Life and was deemed “The next Steve Jobs” by Forbes Magazine for her financial literacy EdTech Games, specifically the wildly successful “CreditStacker App,” available for free in 60 countries and 21 languages on Google Play and IOS.

CreditStacker was named the “Best financial literacy product in the country,” by the White House, Department of Education, and JP Morgan Chase, as well as the “Top 10 App in the world,” by Google. In the past month Rich was featured in interviews on The Breakfast Club radio morning show, and in Essence Magazine (April, 2018’s hard copy addition). Rich also participated in the BWIM Tech & Apps Panel.

“A lot of times women hesitate to tell their ideas – as soon as I say it somebody’s going to come and take it from me. But that’s something that actually gets us in trouble. Almost every investor and top mentor that I have, I met at random. If I had not genuinely shared my idea and thought, I would never have got the investment or made the relationship,” said Rich. “And I have had stuff stolen from me, but my approach is just be bigger, better, stronger.”

Vendors: I received stellar services or sampled delicious hors d’oeuvres from companies below: 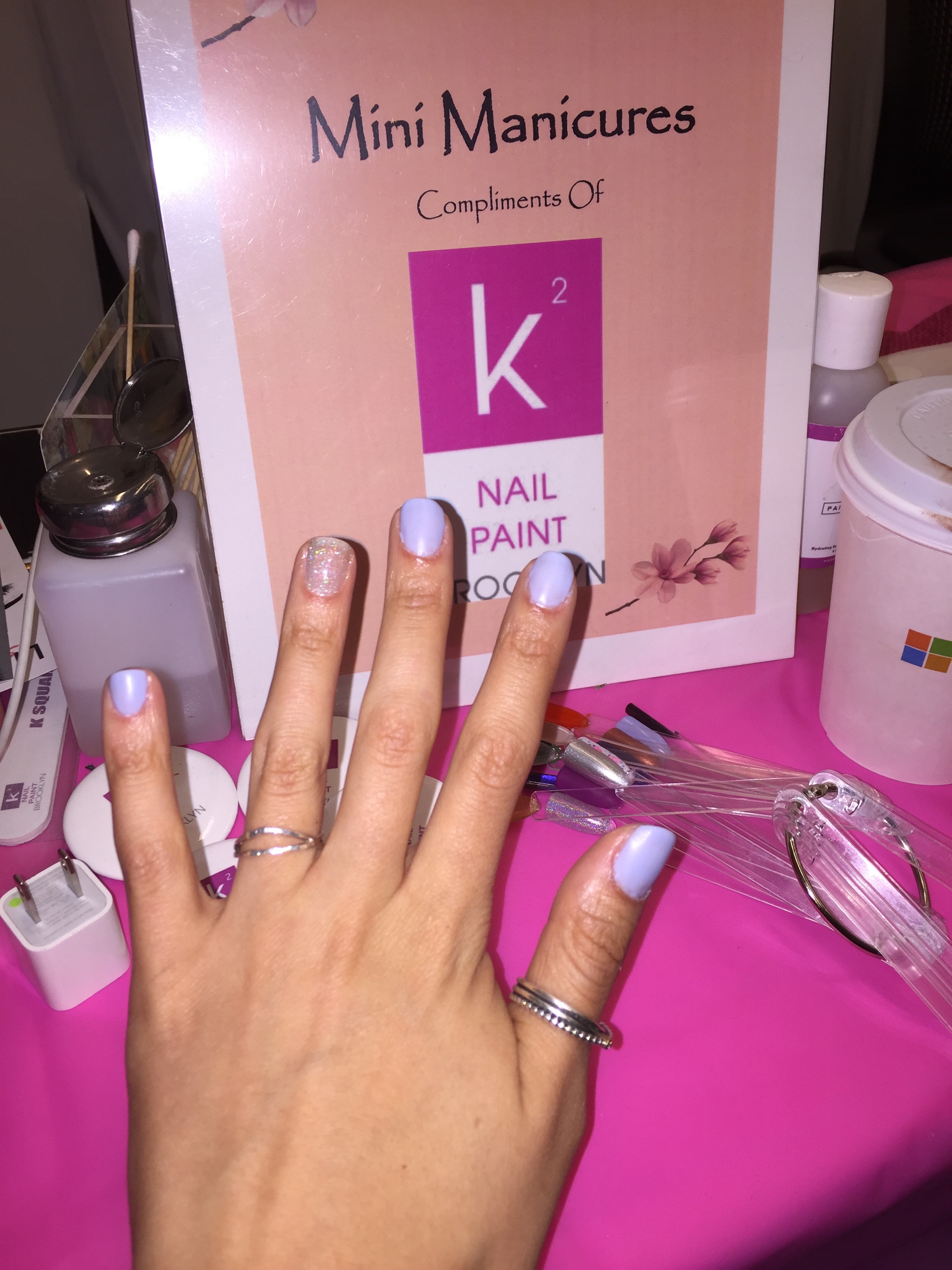 K Squared Nail Paint (Twitter: @K2NailPaint & IG: @K2nailpaint) founded in 2014 by two friends, Kimberly Barker and Karen Nurse is a handmade, is a custom blended, 10-Free, and cruelty free nail polish company based in Brooklyn, New York (I received a mini mani with this product and purchased a periwinkle colored bottle because I loved it so much!).

UP SPA (IG: @theupspa) is your next step towards self-preservation, the “Full Body Experience” is what we provide. We have treatments created and specialized to your needs. Our relaxing regiment will set the tone and change your opinion on first class service (I received a relaxing facial that left my skin feeling moisturized, supple and fresh)!