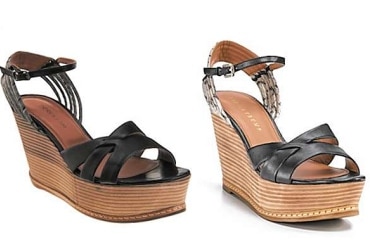 2011 has included many cases of theft, but one that truly sticks out is the repeated shoe theft theme. From the all-year dispute Louboutin vs. YSL (which will be settled in 2012..hopefully) to the recent case with Derek Lam claiming a stolen shoe design from Ivanka Trump , design ideas have completely went an all-time low.

Not too long ago, Derek Lam has reported a claim that Ivanka Trump’s $150 “Cadie” wedge is an exact carbon copy of his $780 “Ayami” sandal except that the color differs. Lam politely grants Trump a week to remove the shoe from Bloomingdale’s shelves whom her line is sold exclusively at.

Though his lawyer had sent a nice note warning on the appeal, Trump had a quick reply stating that the design was a very popular and non-signature having being present in the industry for decades. The seven days are up which leaves more room for the accusation to surface.