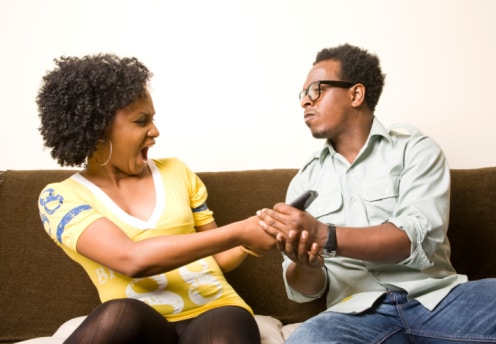 I am in love with this boy so much that we have shared so much together and I feel connected to him. In December he returned from home, Nigeria and before he had left we had a very serious argument. We were calling each other horrible names and all that, and while he was abroad in Nigeria he never tried to contact me or respond to my messages. When he came back from Nigeria, he came to visit me because I was in the hospital after being quarantined for tuberculosis. When he came by to seem me, we talked and tried to settle everything. I spent my Christmas at his place and we made out, but he seemed different and I didn’t feel any connection.

Before I left his house after the holiday, we had a another misunderstanding. A week later, I went by his place again to work talk things out and after we did I asked him if he wanted me to sleep over and he told me no that some other time I could stay. I decided to call a taxi. When I was about to leave he said he wanted to make out. I kissed him and told him that the taxi had arrived and that I wasn’t in the mood or a quickie. But he didn’t like that.

As I left to go enter my taxi, he became angry and refused for me to leave unless I gave him a very good reason for turning him down. I told him the same thing I said before (I wasn’t into it), but he said that wasn’t reasonable and he started acting violent towards me. He sent the taxi I called away. I tried to call my bother to talk to him about what was going on, but he snatched my phone and after about twenty minutes, took me outside his apartment and called another taxi.

I was extremely teary when the other taxi came (I’m very emotional) and he tried to talk to me inside the taxi (he decided to ride with me). But because I was hurt and refused to respond he told the taxi to take him back to his house and left me stranded in the taxi and to foot the bill. I managed to get to the hospital with the same taxi but I haven’t spoken to him since that day. It’s almost been a week now and I’m not the quarelling type. I’ve tried calling him to ask him for something important, but he won’t pick up the phone for me.

Should I move on or not?

To Move or Not to Move

Dear To Move on Or Not to Move,

Honey child! Bless your soul for reaching out tome. The first thing I want to tell you is that you should never let a man hit you! If he get’s violent, it’s time to walk out the door. Period. But of course you are going to need a plan of action to ensure your personal safety and the safety of your heart.

It sounds like this guy that your dealing with has intense control issues and that’s one of the tall-tale signs of what could potentially become an abusive relationship. Remember abusive doesn’t just have to be physical danger. From what it sounds like (not communicating and trying to force you from not leaving), he wants to make you submissive to him.  Now I’m not saying that he may have hurt you in the past. However, if he became “violent” with you after you refused him something that he wasn’t even sure he really wanted (what’s up with this dude?), then that’s not okay. I’m not sure how long you all have been dating, but physical and emotional pain is totally not worth it. And the fact that a week has passed since this fight and he has yet to apologize or contact you? To me, it sounds like he could care less. Be wary of men who bicker violently often but do take a long time to apologize. They are red flags as well and people you don’t want to be with.

So what’s going to be your plan of action? You need to be keen on this. I think it’s time for you to move on, but be smart about it, girl. Strengthen yourself and don’t allow for a simple sorry to make you go running back to him. I can tell through your words that there is a sense of urgency and you want to move on, but you just don’t know how to let him go. Start by disconnecting him from your life. If you have his clothes, items, anything put it in a box where he can come get it if he needs to. But it’s time for you to totally check out. If he’s willing to have a conversation with you to discuss what happened, then that’s fair. But you need to let him know that you don’t want to be with him anymore. If he doesn’t call you in two weeks, then try calling him or writing a letter to let him know how you feel and that you are done with the relationship.  If you’re truly worried about your safety, don’t be afraid to pursue legal action (a restraining order). Or, if you have the opportunity to move in the next few months (a job offer, a friend’s place to stay, a vay-cay) then consider that as well. Time away can really help you think things through.

It’s never easy to break up with someone you are in love with. But your sanity and safety are ultimately more important. And you should never be in a relationship with someone who would treat you this way. Think things through in your relationship. If you feel that he ultimately crossed the line with you, then pack your bags honey. But if your thinking this was his first time acting crazy and you want to give him a second chance — be cautious about it but make sure your clear with him about what he’s done and protecting your heart.

But if it were me, I’d be up and out before you finished the word “go.”

Hoping You Make The Best Decision,