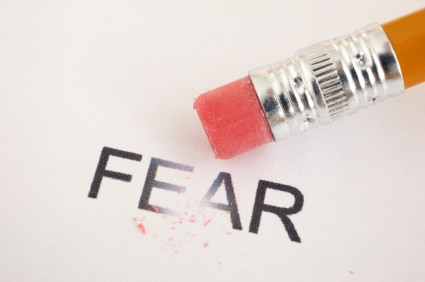 It was Marion Anderson who said “Fear is a disease that eats away at logic and makes man inhuman” and it was Toni Morrison who said “what difference do it make if the thing you scared of is real or not?”  For the majority of my life I have let fear steal me of what I could have been. I used to think the loss of an opportunity or the failure of my marriage was just the way life was.  It wasn’t until I got into my late twenties that I realized what it was that was robbing me of the joy I could have.

That four-letter word that is so debilitating to many women is not the kind of shaking in your boots, goose bumps down your arms fear that we usually imagine.  For most it’s more like the thing you measure all your choices against. I better not do this because this might happen or I’m just not going to try because this might happen.  Real or imagined it makes no difference — time and time again fear of the unknown has stopped whatever success you could have had right in its tracks.

Fear has become a way of life for many these days, and for more people than you would think. Every time you turn on the T.V. you can see derivatives of fear such as hate and in some instances anger. As a society we still haven’t learned how to deal with anything unknown except to fear it.  Races still fight against each other and religions still vie to discredit one another. It seems as if with all of this going on maybe we should accept this emotion as one that is normal.

Being a woman that has lived my entire life afraid, I have come to a point where I believe enough is enough. I have taken a chance on love again despite what my mind may fantasize to happen. I no longer try to see the future – I enjoy the now moments.  This rebellion on fear is not loud and obvious to for many. In fact it’s something that comes from the inside. I will write the story I feel in my soul. I will go for the job I’ve been dreaming of.  I may just be the girl next door but I have become the girl next door who lives despite her fears.

I no longer waste so much time thinking about “what if”; I just do. Each goal that I accomplish becomes a memory of success that I can use in case fear threatens once again to destroy my hopes and dreams. A victim no longer, there is freedom and joy that comes along with knowing that I will plan that trip to Greece or go after what I want because I can and I deserve to in this singular life that I live.

When you let go of the weights that hold you down whether it be in your mind or otherwise, it becomes easier to fly up to the place in your life where you desire and are supposed to be.